It's too late to be a Pessimist!

Sarah's new goal is to sell one hundred million Wonderbags worldwide, helping over a billion families. For every bag sold, one is donated to a family in need.

WikiHouse is an open source building system. Many designers, collaborating to make it simple for everyone to design, print and assemble beautiful, low-energy homes, customised to their needs.

GravityLight: lighting for a billion people

GravityLight is a revolutionary new approach to storing energy and creating illumination. It takes only 3 seconds to lift the weight which powers GravityLight, creating 30 minutes of light on its descent. For free.

Right now, three billion people worldwide are cooking on open fires, or using dirty and dangerous fuel. This has a huge impact on health, with an estimated 4 million people dying from indoor cooksmoke each year. This is more than HIV/AIDS and Malaria combined and is a problem that is widely unknown and entirely preventable. The majority of the people affected are women and children living in developing countries who die prematurely from illness caused by excessive smoke inhalation.

BioLite | A New Generation of Energy

Turn Fire Into Electricity: Forget the fossil fuels and create a smokeless flame using the wood around you. Power your devices while you make your meals with BioLite's TEG technology.

In Laos, more than 90 percent of households still rely on biomass fuel like firewood and charcoal for daily meal preparation. According to the 2013 Global Burden of Disease Study, household air pollution caused by burning these smoky fuels is the single leading risk factor for premature death in the country; hence, BioLite's interest in supplying our product to this market.

The term »out of poverty« has a very specific meaning for KickStart. It does not mean that a person or family is merely making a bit more money, but making enough to money to transform their lives.

Timothy Prestero thought he'd designed the perfect incubator for newborns in the developing world -- but his team learned a hard lesson when it failed to go into production. A manifesto on the importance of designing for real-world use, rather than accolades.

We're producing a phone to improve the electronics value chain. One step at a time.

Powerwall is a home battery that charges using electricity generated from solar panels, or when utility rates are low, and powers your home in the evening. It also fortifies your home against power outages by providing a backup electricity supply. Automated, compact and simple to install, Powerwall offers independence from the utility grid and the security of an emergency backup.

By attempting the first Round the World Solar Flight, they want to demonstrate that clean technologies and renewable energies can achieve the impossible. For the Solar Impulse team, pioneering spirit and innovation can change the world.

The 2 Euro T-Shirt - A Social Experiment

Fashion for a bargain - that's what everyone wants. A T-Shirt for 2€ isn't inconceivable nowadays. Unfortunately, people don't often consider who is paying the real price.

Slow Food is a global, grassroots organization with supporters in 150 countries around the world who are linking the pleasure of good food with a commitment to their community and the environment.

As a matter of fact, it is easy to observe that lasting natural systems result from a multiplicity of largely independent systems and are based on a variety of living strategies.
…
The result is that rigid, vertical organizational models that were dominant in industrialized society are melting into fluid and horizontal ones as new distributed forms of knowledge and decision-making become more common
…
Products must be designed so that their production can be as near as possible to where they will be used (point of use production)
…
The more a system is networked, the larger is its interface with society and the more the social side of innovation has to be considered

The scale of what we’re designing has shifted from products, to companies, to economic systems. Who we’re designing for has expanded from a solitary user to an intimately connected web of people, spanning the globe.

By zooming out from users, to consider the wider network of stakeholders, we can unlock value at every stage of the process. As a designer, that includes building feedback loops into your work; knowing the life cycle of materials you use; collaborating with other industry stakeholders; and considering unintended consequences.

It's about more than producing nicely packaged green products or cool-looking hybrid cars. Today, design must continue to shape our everyday actions, reconfigure our spaces, and influence our consumer desires … The Rise of Collaborative Consumption, Location 2994

Bicycle for the Mind

I read a study that measured the efficiency of locomotion for various species on the planet. The condor used the least energy to move a kilometer. And, humans came in with a rather unimpressive showing, about a third of the way down the list. It was not too proud a showing for the crown of creation. So, that didn’t look so good. But, then somebody at Scientific American had the insight to test the efficiency of locomotion for a man on a bicycle. And, a man on a bicycle, a human on a bicycle, blew the condor away, completely off the top of the charts.

While affordable, Buffalo Bicycles and spare parts can be twice as expensive as the lowest cost competition. However, social enterprise sales and customer feedback indicate the quality of the Buffalo Bicycle generates a strong return on investment. Field observations from our philanthropic programs show that recipients can avoid the majority of repair expenses with simple maintenance and better riding behavior. To help the machines last longer, we are increasing training, education and incentives for bicycle recipients.

Farm from a Box

Farm from a Box provides communities with the tools required to grow their own food and earn an income. Built from a modified shipping container, each unit contains a complete ecosystem of smart farm technologies to enhance agricultural productivity; from renewable power and micro-drip irrigation, to Information and Communications Technology.

Precious Plastic is a global community of hundreds of people working towards a solution to plastic pollution. Knowledge, tools and techniques are shared online, for free. So everyone can start (yes, you too!).

We are independent, poor but free :)

Hundreds of people all over the world contribute to the project with their skills & knowledge, single or monthly donations.

The global economy is in crisis. The exponential exhaustion of natural resources, declining productivity, slow growth, rising unemployment, and steep inequality, forces us to rethink our economic models. Where do we go from here? In this feature-length documentary, social and economic theorist Jeremy Rifkin lays out a road map to usher in a new economic system.

Fossil fuel companies are driving the climate crisis and have successfully delayed action on climate change for decades. It’s time for our institutions to take a stand and cut their financial ties with fossil fuel companies. And it’s up to us to make sure they do.

Transition by design - not by disaster.

POC21 is an international innovation community, that started as an innovation camp. The camp brought together 100+ makers, designers, engineers, scientists and geeks. Late summer 2015, we have joined forces in a stunning french castle to prototype the fossil free, zero waste society. Our ultimate goal was to overcome the destructive consumer culture and make open-source, sustainable products the new normal. Over the course of 5 weeks we developed 12 sustainable lifestyle technologies and built an international community of innovators and supporters, that continues to grow. 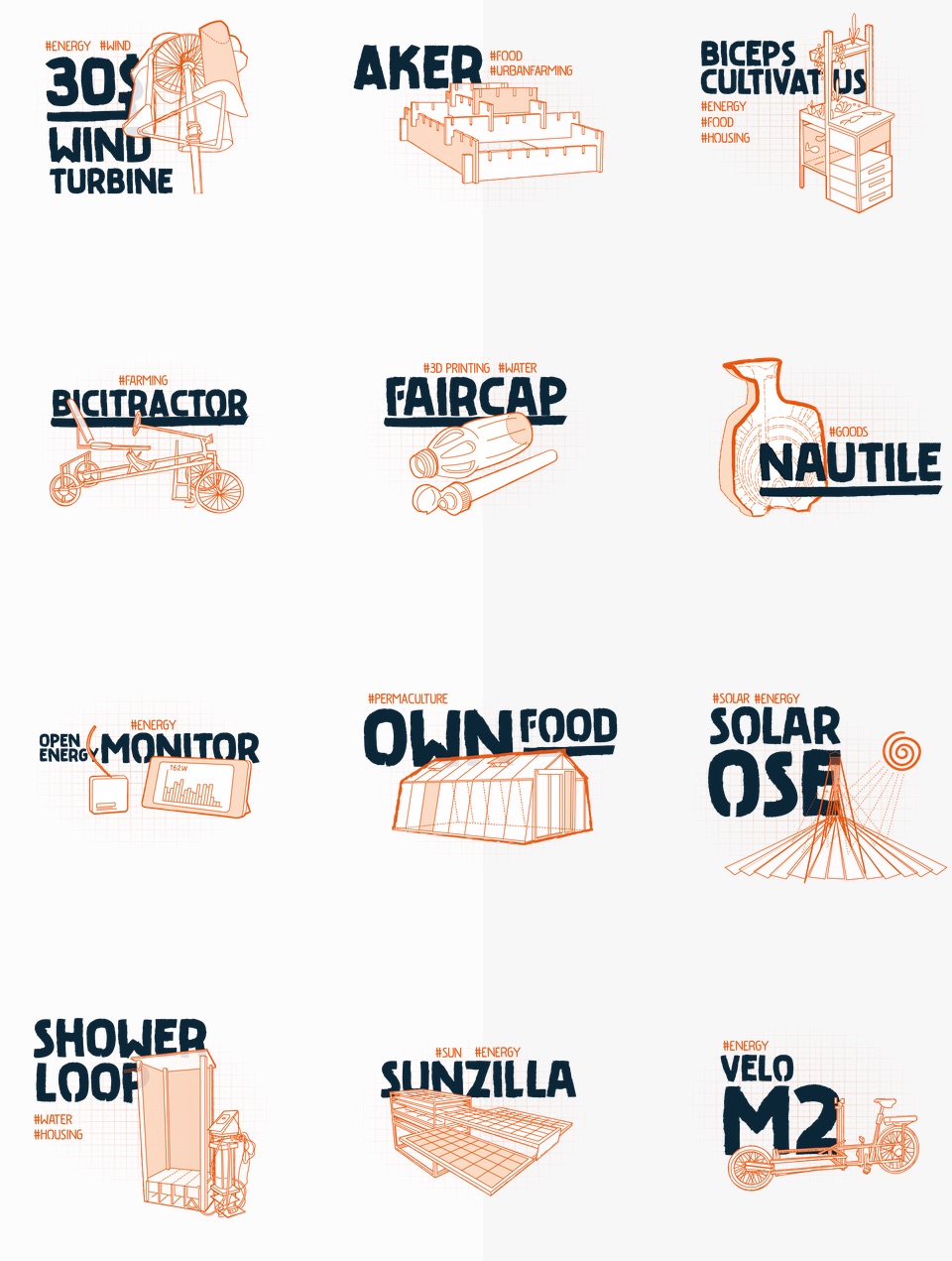 We innovate inclusion, seeking the potential in every newcomer and building communities of action.
In a world of constant change and crisis, we embrace complexity and design for systemic transition.

MORE THAN SHELTERS (MTS) was founded with the mission to develop innovative solutions for the global refugee crisis, one of the greatest challenges of our time. We are a social enterprise based in Germany, working with an interdisciplinary team, refugee communities and our partners from the humanitarian and social sectors to develop, test and scale next generation impact solutions

We believe that the easiest way to change people's behaviour for the better is by making it fun to do. We call it The fun theory.

EarthGames is a growing community of researchers, game developers and students who share a passion for games and the environment. We’re hard at work adapting the latest scientific research to develop amazing video and board games to teach and inspire players about the natural world and our role within it.

Could a video game help us solve climate change?